You are here: Home / Student Spotlights

The Spencer’s have been with INSPIRE since November of 2015 and have brought so much with them to the studio! Both Rachel and Kayla have danced for quite sometime and they found INSPIRE really by happenstance. Ashli, Rachel and Kayla’s mother, said they were driving by one day last summer and wondered what INSPIRE was all about. They came in and after meeting Ms. Shelley, our awesome and amazing dance director, they were both committed to dancing this year at INSPIRE.

Ms. Shelley, who teaches both Rachel and Kayla, speaks very highly of both girls:

“Rachel is a VERY BRIGHT LIGHT every time she is at INSPIRE. She is always welcoming others, has amazing work ethic, encourages everyone and loves to learn. She is one of the only students in Arizona I have ever taught who says “thank you” when she is given a correction. I think that is very noteworthy.” 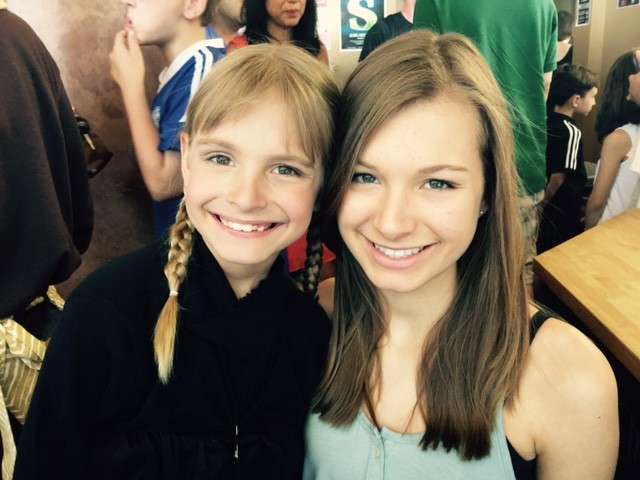 “Kayla has shown tremendous growth this year and has chosen over and over to take the high road and to be an example to others. Her smile and her laugh cheers up all those around her at the studio!”

Both Spencer girls have enjoyed their time at INSPIRE. Rachel loves the stage and has enjoyed learning dance and developing her skills for her favorite activity – music theater! While Kayla, who performs with our level one Dance Company SPARK, has found a fun, loving community that is a place she can channel her boundless energy!

We asked Ashli why she and her girls chose INSPIRE and she said, “Both girls committed to dancing this year because of Ms. Shelley. Ms. Shelley instills a magical combination of love, fun and hard work! We are thrilled with INSPIRE’s focus on performing as a road to developing and demonstrating high character. All that after we just drove by one day last summer and wondered what INSPIRE was all about.”

We are grateful to have these wonderful girls at the studio and hope we can continue to provide a place for learning and growth in a positive, uplifting environment – on and off the stage. 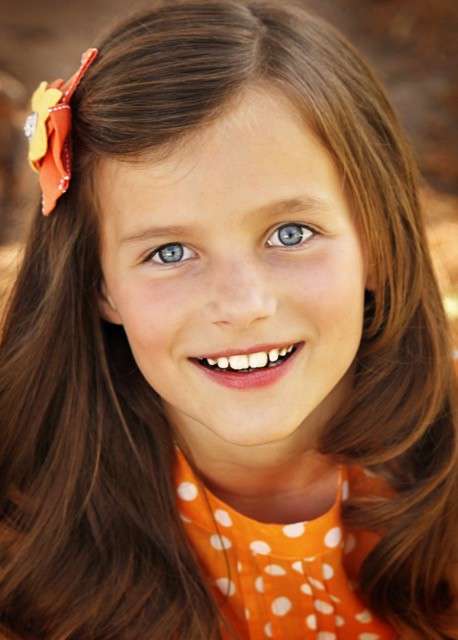 Olivia is in two company performance groups ripping up the stage in the level two dance company IGNITE and singing her heart out with our younger vocal performance group AMPLIFY. Her directors have only good things to say about her. Dance Company director Shelley Van Shaar said, “So far this year she stands out as being one of our most professional, respectful dancers in class.” And AMPLIFY director Eric Sackett said that, “She has amazing work ethic. She is also always on task and has the most wonderful attitude during our rehearsals.”

Olivia loves Dolphins and Sea World and to prove her love for the water, Olivia won the 9 & 10 year old division at the city of Mesa dive meet this summer! She likes to ride horses, ice skate, play tennis, sing with AMPLIFY, tumble, play violin and do things with her family. She also loves to teach her dog Max tricks and write stories and make movies with her friends. And most importantly she’s a great friend, especially to her little sister Gracie.

Olivia is 10 years old and has been dancing since she was three. We are lucky to have her at INSPIRE! 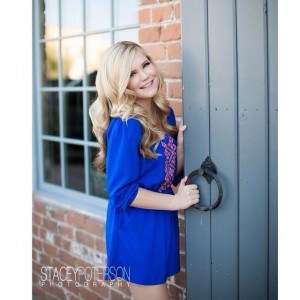 Tatum Stoleworthy got the bug for performing at an early age and has been doing some pretty amazing things since then. Tatum is 15 years old and performs with our vocal performance group ELEVATE. This is Tatum’s first year being with INSPIRE.

Tatum recently sang the national anthem at an Arizona Cardinals game in front of tens of thousands and sounded magnificent. She is also very involved in making a difference in her community and is running for Miss Maricopa County’s Outstanding Teen, her platform is “Music IS Therapy”. You can vote for her here.

Although Tatum’s busy, she said, “In the little free time I have, I love being with my family, friends and working with special needs kids. My goal is to raise awareness towards the importance of music therapy and hope one day to become a music therapist. Also, becoming a Young Ambassador has always been my dream!” And we hope that she reaches it!

We’re so happy to have Tatum on the INSPIRE team and look forward to helping her reach her goals. 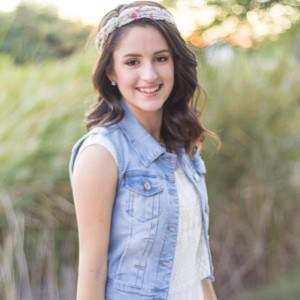 An aspiring law student, a future Miss Arizona and the eventual founder of a non-profit set up to help underprivileged children – it’s safe to say that Maddy Hipps has big dreams!

Maddy told us that, “one of [her] life goals is to be a good and wholesome professional singer that can help change others through music.” A goal that we are excited to help Maddy achieve.

Maddy has been singing pretty much since she was born. “My parents have always said that I pretty much was born singing”, Maddy said, “and that I would hum myself to sleep when I was just one month old.”

That humming eventually evolved into singing and ultimately at the age of 10, Maddy made the leap onto the big stage to sing in front of other people. The reason? She said, “one of my favorite things is pushing myself out of my comfort zone! I like knowing that I tried hard and that I will not have anything to regret later in life.” We know she won’t.

We are so lucky to have Maddy at INSPIRE. She adds so much light to ELEVATE and her instructors are so pleased with how hard she works in rehearsal. ELEVATE Director Sara Gibbons said that, “Maddy works really hard and has a super positive attitude about everything that she does. She brings a smile with her everywhere and she’s a friend to everybody. She’s willing to stretch herself which is very admirable. She’s just all around awesome-sauce.”

Maddy is 17 years old and has been with INSPIRE since August. 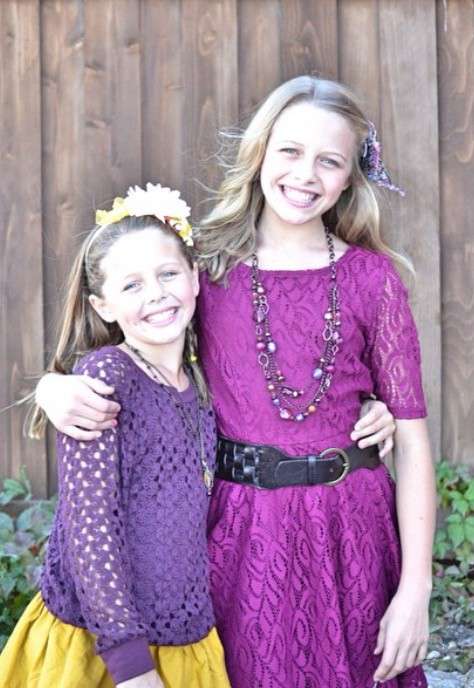 Lexi and Karli are two of our favorite performers at INSPIRE and are just all around great girls.

The Wheatley’s grew up in Colorado and Utah making the move to Arizona fairly recently. So far they’ve survived, but both miss being in Utah.

Lexi has been dancing since she was 5 years old and says that performing for others makes her happy so that’s why she keeps doing it. Lexi always brings spunk and light with her to the studio. Her vocal performance director said, “she has the it factor on stage. Some people are just born with it, and Lexi has it. I love watching her perform!”

Karli’s path is similar to her younger sister and she started dancing at age 6. She’s always loved the stage and has been lucky enough to be involved in many performing avenues in her lifetime. Karli said that she performs because it’s fun and it makes her happy. Her dance director, Shelley Van Shar, only has good things to say about Karli. “Karli is a firecracker and we love having her at INSPIRE! She is full of light and is a natural leader.”

The girls said their favorite things about each other is that they can share clothes even though their 4 years apart. They can tell each other anything and love dancing together at INSPIRE. We are so lucky to have both of them!

Karli, Jared, and Josh are as different from each other as they can be, even their voices are different; but when they start singing together they create a sound that is unified, blended and almost like one. Singing is what bonds these triplet triple threats together.

Karli is the oldest of the triplets, she is quiet, and likes to be alone. She does not enjoy being the only girl at home, and really wishes she had a sister. She loves to read ghost stories and watch scary movies. She enjoys playing basketball with her brothers and is pretty good.  She also loves singing.

Jared is the second of the triplets, he enjoys playing jokes on people and making people laugh. He loves to play soccer and basketball, but his biggest love is acting!  Jared has played Tiny Tim in A Christmas Carol at the Hale Theater the last four years.  He played Collin in The Secret Garden a few months ago as well and has been in many other plays.

Josh is the third triplet and the baby of the family. He loves to read, play basketball, and perform on stage.  Josh plays the piano, and the ukulele. Josh’s passion is singing. (He even sings in his sleep!) Josh has participated in different voice competitions and took first place last year in his age group and won the overall category.  He has been a soloist for Rob Gardner in several of his projects with the latest being Cinematic Pop.

The triplets started singing together when they were four years old. They would sing together in the car, at home, pretty much everywhere. They started taking voice lessons when they were five from Jordan Bluth and were performing by the time they were six.  They formed their music group Triple Forte when they were eight years old and recorded their first CD when they were nine. They have since performed all over the valley opening for the Dutton’s and performing with Michele Baer at different political events.

The triplets’ mother, Stephanie said of her kids, “The best thing about having triplets that sing, is they break out into song anywhere!  It is never quiet or dull around our house or in the car, and when Josh, Jared and Karli add three part harmony it is just amazing!!  I feel like I am the luckiest mom ever.”

They’ve said of their experience, “We’ve met great people, made lots of friends, and learned good music. The best part about INSPIRE are the experiences we’ve had.  We’ve have had amazing opportunities singing for the UN, and meeting fun people like We are the Strike and most recently, David Osmond, preparing for the More than Music Benefit Concert, to help raise money for Bogota, Columbia. But nothing compares to the spirit that they felt when they sang Fill my Soul with Peace at the Mesa Temple Christmas lights. All of these moments and more have added to their INSPIRE experience.

The triplet’s are 13 years old and have been with INSPIRE since 2012.